There is a new monument in Polotsk (a Belarusian oldest town). It is dedicated to the 22nd letter of the our alphabet  - Ў. This letter represents a sound similar to English sound [w]. Therefore, we, Belarusians, easier to learn English than, for example, the Russians.

There is one funny and sad story. In Brest, in 2009, authorities unveiled a monument dedicated to the 1000th anniversary of the city. At 12 plates were allowed a lot of errors: 70 times was omitted from the letter Ў, there were other stylistic and typographical errors. 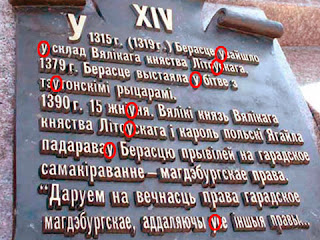 Photographs of the monument went around the Belarusian Internet. The government will soon replace the bronze plaque on the new - now with the letters Ў.