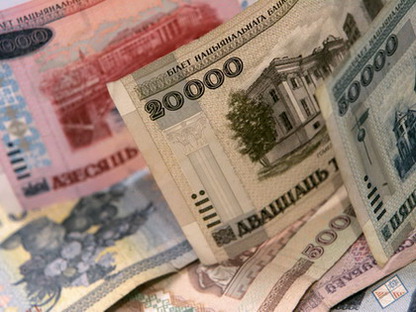 A prototype for the image served as a Soviet stamp. Can you compare these pictures :) That is why the currency of my country is sometimes called "bunny." (zAitchik)

Since 1992, much time has passed. In this post I will tell you about the current money of Belarus, to the tourists who come to my country.

Let's start!!. It is 10 rubles. Banknotes of 10 rubles is the smallest of its brethren. It shows the old building of the National Library.

The following banknotes of 20 rubles. It shows the building of the National Bank of Belarus.

By the way, recently the authorities want to seize two of the bill to use, but so far nothing has changed. If the bill did disappear in the future, I will write.

The following notes - 50 rubles. It shows the Brest Fortress. I already wrote about the history of the fortress HERE.

This bill is 100 rubles. It depicts the National Theater of Opera and Ballet. This is the most recognizable note - because of his color. All other colors are a bit similar to each other, and often people are confused. But this bill be confused with anything is impossible.

500 rubles in banknotes with the image of the Palace of Trade Unions (Minsk).

This is a bill in 5000 rubles. It depicts a sports complex Raubichi. For this money you can already buy a bun, pay the fare in public transport and taxi, buy a bottle of mineral water.

Here is a bill of 10,000 rubles. It placed an image of the Vitebsk summer theater. Every year in July in the amphitheater of the festival "Slavic Bazaar". (Incidentally, the city celebrates with a week!)

This is a bill of 20,000 rubles. It depicts Paskevich Palace - the card of Gomel. View photos of the palace can be in my blog - HERE.

It notes in 50000. He placed an image of the Mir Castle. This beautiful castle is not far from Minsk. Unfortunately, I have not been there, but I hope that I will get there in the summer.

Bills of 100,000 rubles, and the image Niasvizh castle. This castle is located close to Mir.

If I wrote this post a month ago, I would have finished with these words: "Soon there will be a new bill of 200,000 rubles. While no one knows that it will be shown." But a couple of weeks ago, this bill has been released. While these bills have seen very little of the Belarusians and people are cautiously taking notes in shops and offices (just people are not used). I held it in his hands two days ago, when withdrawing money from a bank card. In the new bill shows the Mogilev Museum of Art.

So, if you come to Belarus, you should know that only such notes are accepted at banks. There are many other bills that are already out of circulation. They can bring as gifts, such notes are sold in specialty stores.