Yesterday I with the disciples of our school went on a trip to Krasny Bereg. This is village, it's located in 20 km from Zhlobin, in south-eastern part of Belarus. I took many pictures of this terrible place.

First a little history. During World War II the Nazis created in Belarus for more than a dozen children's concentration camps. In these Nazis were collected children from 6 to 14 years, and then the doctors took their blood for the soldiers of Hitler's army. Girls are mostly affected by the actions of fascists. Children were taken forcibly from their parents and trafficked to the forwarding station. This the children lived for a while and worked for the Nazis.
The enemies retreated to vulnerable children with the cruel and inhumane. The soldiers shot the young captives without mercy for the slightest mistake. Once Hitler's soldiers saw in the hands of a little boy a white stick. He thought that it was a leaflet and killed the child. Another time in the barracks, where boys and girls lived, the Nazis found a small kitten, which the children were fed. For this offense the Nazi soldiers shot for all children. For the fact when the children took the blood, they were given a cup of tea and a small piece of sugar. Many kids didn't understand what to do the doctor and asked for - "give us sugar". When children died, their bodies are simply thrown away as waste material.
Memorial Krasny Bereg we, Belarussians, call "Children's Khatyn".

1990 children were deported to Germany, and their fate is not known for today.

In 1994 the village was the construction of the memorial, but due to lack of funding construction was finished only in 2007.

If you are in the memorial, the first thing which you see it's a figure of a girl Katya Susanina. It stands on a red stones (a symbol of the blood of children), you can see her slender  and helpless figure , his hands crossed over the top of her head. Katya Susanina is a symbol of all the dead children on the planet. 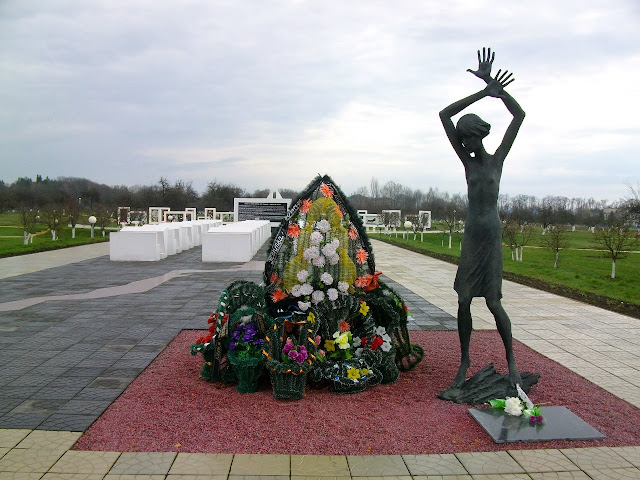 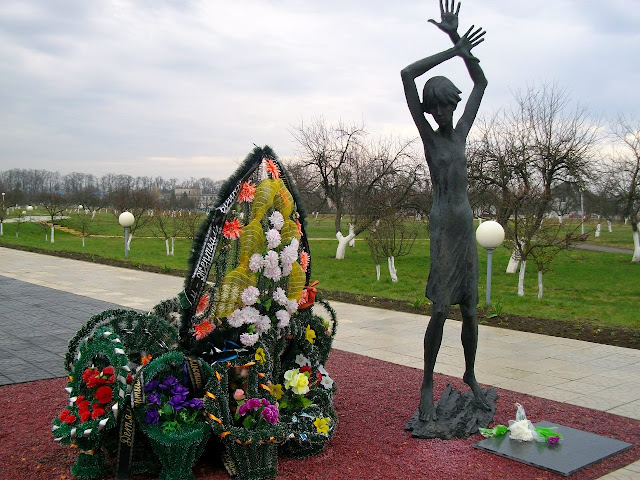 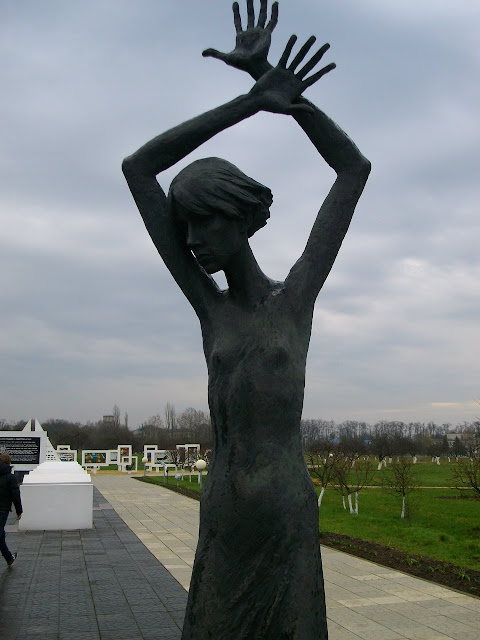 Then you go down the stairs and go to the black beam. This is a broad band of black stone slabs. Black breaks the beam of a brilliant red beam. It is a symbol of blood spilled by children in war. No one is allowed to walk the red beam. The black line of 21 school desks are made of white stone. This is a "dead class." It never will ring the school bell, ever the teacher does not begin to tell interesting stories. 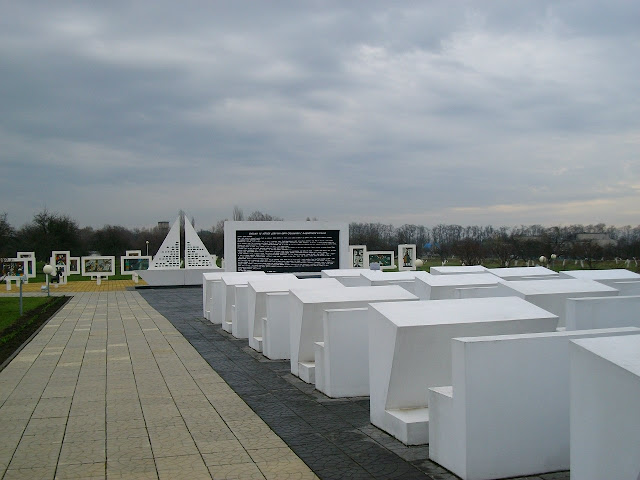 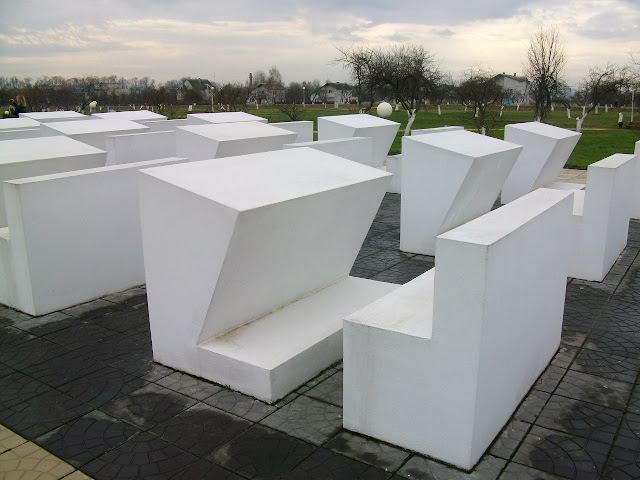 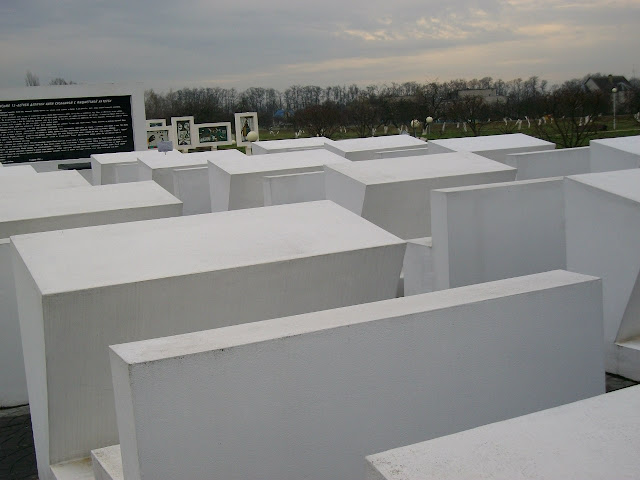 On the teacher's table lay a granite slab, on which are written the bitter row about the fate of Krasny Bereg. 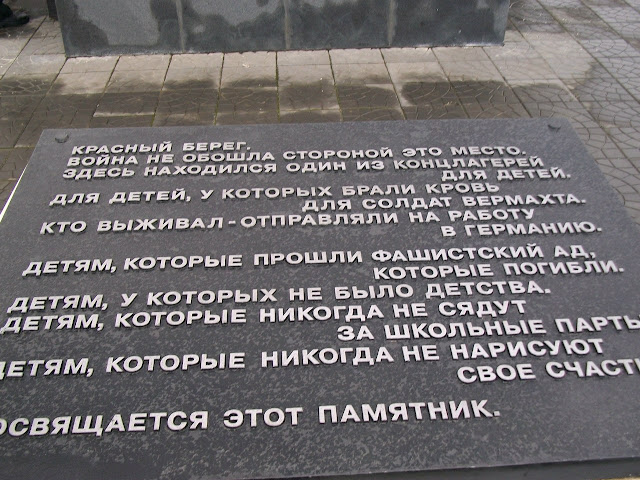 But the most terrible place is a school board. It reproduced a letter the 15-year-old girl Katya Susanina to her father. Those who know the Russian language, able to read it from the board. For others, I tried to translate it. 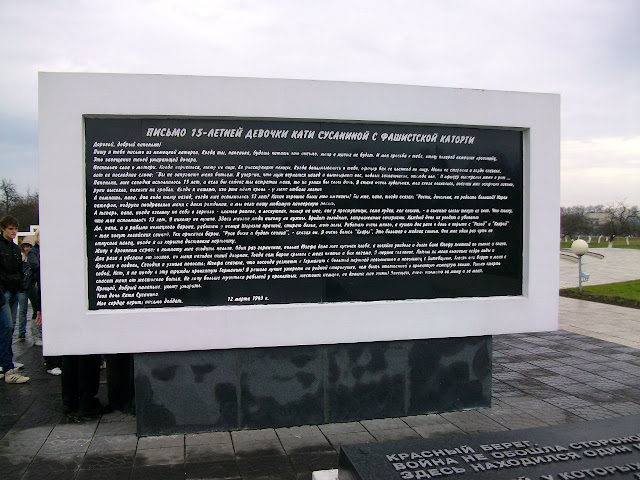 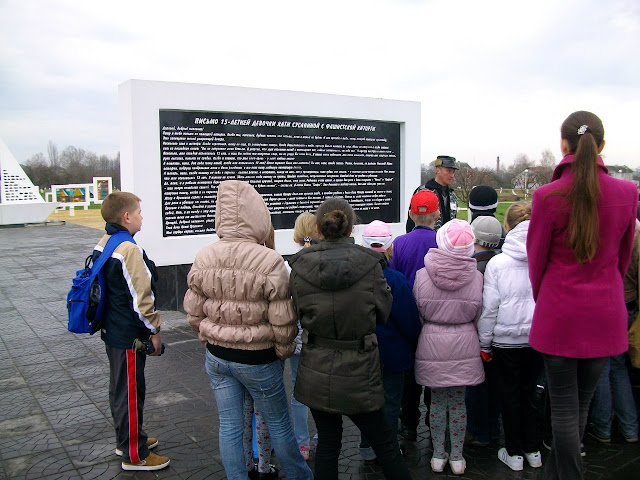 "Dear father, I am writing you a letter with a German prison.

When you, papa, will read this letter, I am  already dead.
My request to you, father, punish German bloodsuckers, please. It is a testament of your dying daughter.

A few words about mother. When you return, my mother did not look for her shot by the Germans. When wanted to know about you, the officer hit her with his whip in the face. Mom could not stand and proudly say, that her last words: "You do not scare me beating. I'm sure my husband will come back and throw you, vile invaders out. " And the officer shot my mother in the mouth.

Dear Papa, I am now 15 years old. If now met me, you would not know your daughter. I became very thin, my eyes were sunken, my pigtails cropped heads, hands are dry, like a rake. When I cough, my mouth is bleeding.  The Nazis fought off my lungs.

And remember, Dad, two years ago I was 13, it was a good birthday. You told me then: "Growing up, my daughter, much to the joy." Gramophone was playing, a friend congratulated me on my birthday and we sang our favorite song . And now when I look at myself in the mirror - torn dress, the number on the neck like criminals, I am very thin as a skeleton, and the salt tears in my eyes. What good is that I was 15 years old. I am useless. Here, many people are useless, too.  They rove harried like hungry sheepdogs.


I work at a German Baron Sharlen as a laundress, I wash clothes and floors. I have a lot of work, and I eat only twice a day, in a tub with Rosa and Clara. This are  nicknames of master's pigs. So ordered the Baron: "Russ was and is a pig." I'm afraid of Clara, this is a big greedy pig. One time I almost bit off my finger when I got out of the trough potatoes.

I live in the barn. I can not enter the room. Once Josefa (a Polish girl) gave me a piece of bread. The hostess saw and a long whip to beat Jozefa's head and back.

The two times I ran away. Their janitor found me. Then the Baron himself tore off my clothes and beat feet. When lost consciousness, I was poured a bucket of water and threw into the cellar.

"News" - said Josefa - "The owners go to Germany with a large party of slaves and take me and you with them." I'm not going into this accursed Germany. I decided it was better to die in my own party, than to be trampled in the cursed German soil.

I do not want to suffer a damned slave brutal Germans would not let me live.

Dad, I will make thee avenge my mother and me.

My heart trusts - a letter will come to you.


The father has not received a letter from Katya: he and brother of girl burned in a tank, lined with Nazi soldiers in 1944. People found the Katya's   letter in the same year in the chimney. Now it is stored in Minsk. 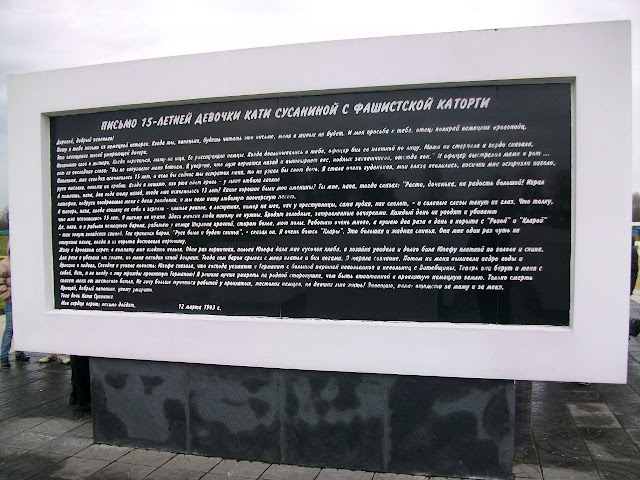 On the back of the school board there is a Map of Belarus with indication of all children's concentration camps. This is a map of the future which were killed in Belarus. 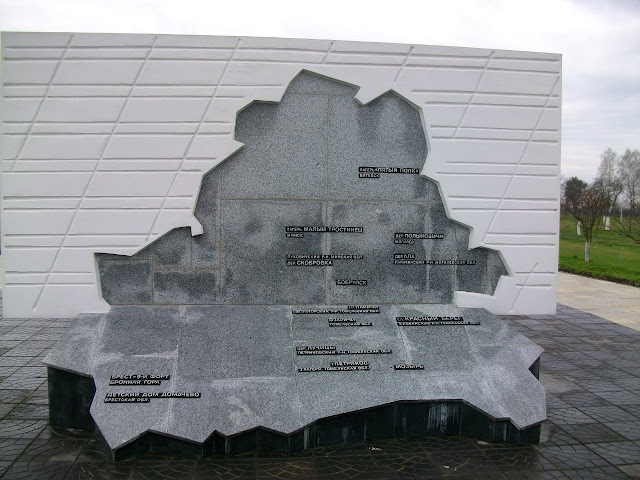 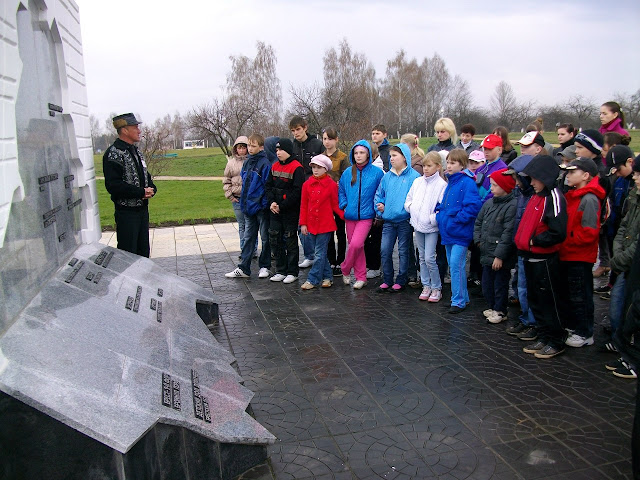 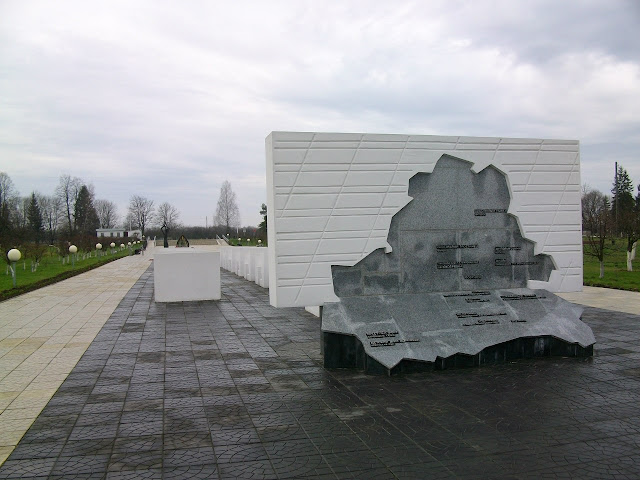 Next is the Square of the Sun. This place is the symbol of the surviving children. A large stone ship stands on the Square, its sails are written by the names of alive kids. All these children are freed by Soviet troops. Boys and girls out of the barracks and called their names. These names are written on the sail boat. 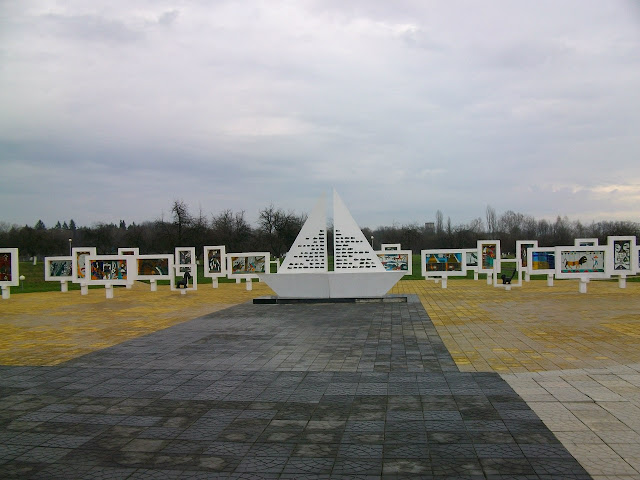 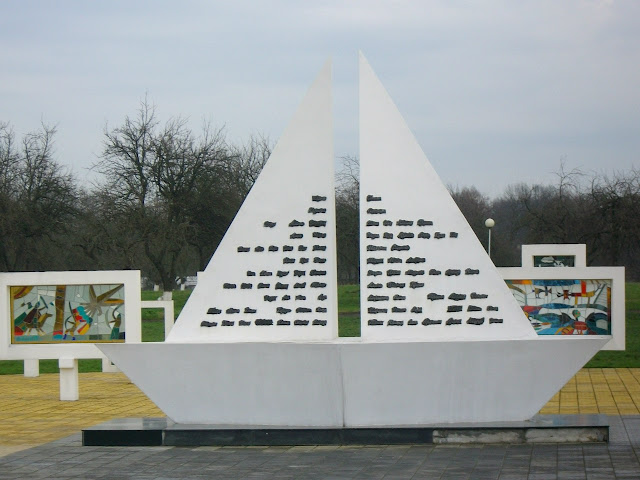 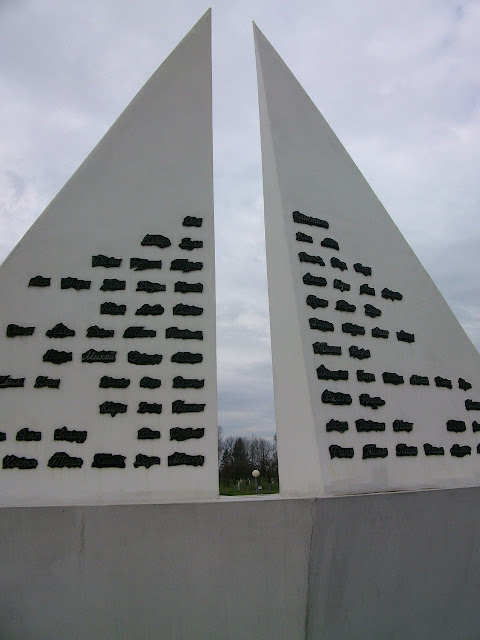 Next are 24 easels. After the war, the artists visited the children which  were in various concentration camps during the war, and asked them to draw pictures. These drawings in the form of stained glass, are at easels. This is - a symbol of life. Children, even in war, seeing death every day, didn't stop to think about life. 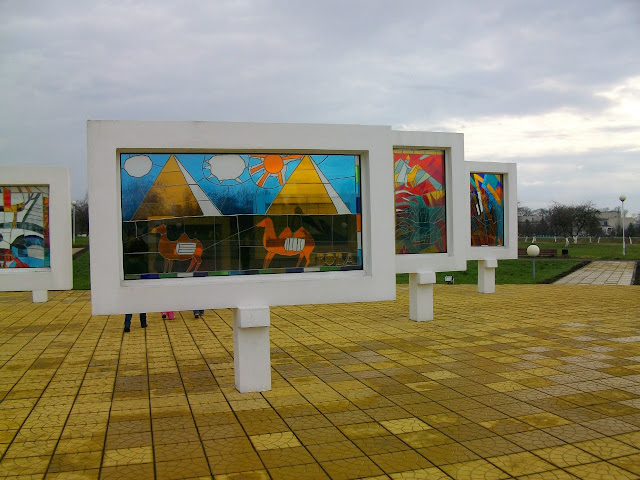 Still you can see four statues. Among children of Zhlobin social shelter held a competition for the best crafts from clay. Four figures of animals made by the children's hands were selected, enlarged and cast in metal. 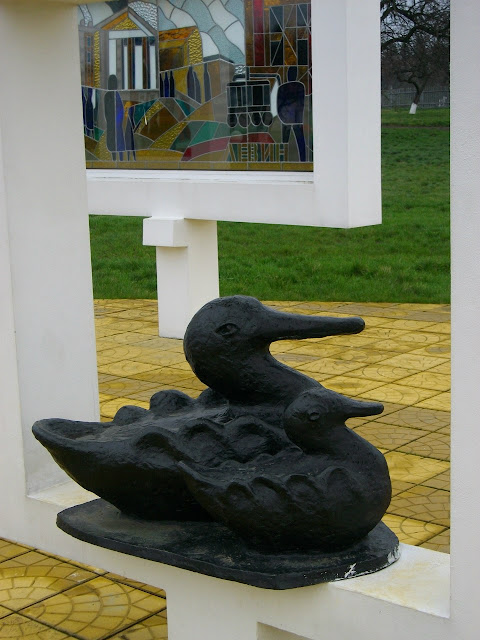 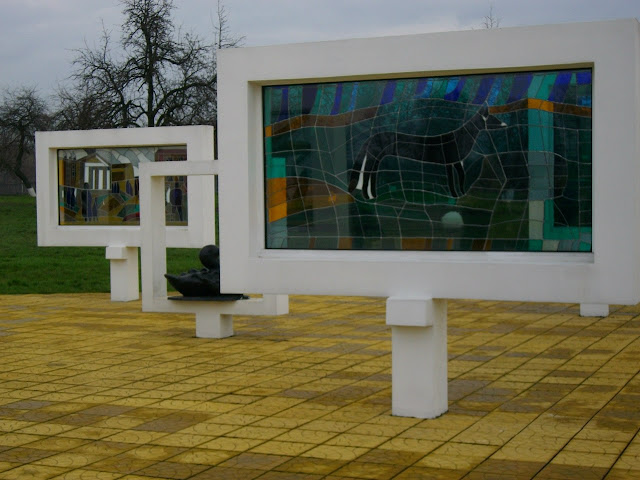 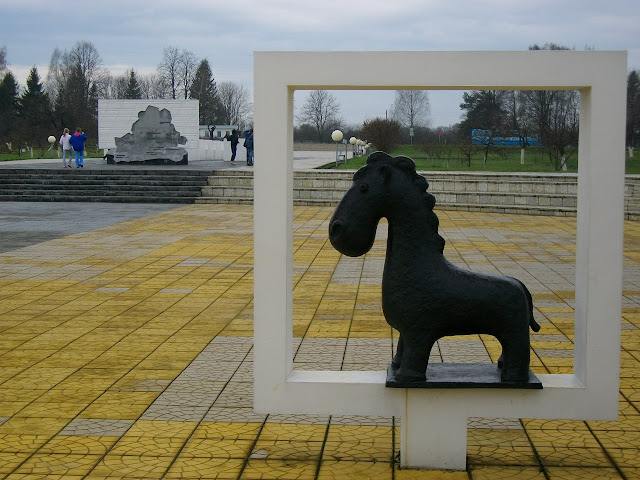 We left the memorial with a heavy heart. Children did not talk long on the bus - everyone was thinking about something...
Автор: Migalayte на 15:41